My drawing board which hasn’t been getting as much use since moving to the Cintiq. (The typewriter on the desk is a 1921 Royal 10.)

I recently mentioned getting a Cintiq and one of my friends had commented whether I would show a photo of it in my studio, so I figured I’d do so for today’s post. This got me to thinking — I recall encountering a book devoted solely to documenting artist studios. While I’ve always been fascinated with commercial art studios, I’m more interested in private art studios and seeing how other artists surround themselves. Some artists have minimalist studios to avoid distractions while others have studios surrounded by clutter.

If you look closely on the second level of the glass-paneled bookcase you can see an animator’s maquette of Christopher Robin which I used while designing for the Pooh & Friends figurine line. And for anyone possibly interested, the guitar on the wall is a 1989 Hamer USA Californian.

Because I’m essentially imprisoned in my little work space all day long, I need to surround myself with all the little things that inspire me throughout the day. I have quite the collection of art books, many children’s books, as well as some novels, academic books, and comics. I also have a couple of electric guitars with which to entertain myself when I need to take a break, so I’ll kick back on the window seat and make noise when I’m restless. When I want to work out ideas for something I’m writing, I’ll often rough out things on one of the several vintage typewriters I’ve acquired over the years. Anyway, since I don’t want to have to itemize everything in my studio, I’ll let you wade through the photos. I took a couple shots from different corners, as well as tried to stitch together a few panoramas (hopefully the panoramas are not too confusing, since the edges of each photo didn’t align perfectly when attaching them to one another. Plus the lens distorts things and makes them wonky, so excuse the warped, cartoon-like perspective).

The little amp on the ground there is a 1974 Fender MusicMaster Bass amp, which, while stinky for bass is really cool for guitar, especially after running the guitar through a few pedals (for the amp nerds out there, it’s the earlier 6aq5 version, not the later one running 6v6 power tubes).

As far as the Cintiq is concerned, you can check out the before-and-after photo and use the scanner on the top right of the desk as a reference to see what’s changed. The scanner has remained in the same spot, so you can see how the desk was routed out and another level added to accommodate the Cintiq. The iMac in the “after” shot is a newer computer and I got rid of the extra monitor and the printer underneath. The pull-out keyboard section also got dropped down. Overall, the whole thing is pretty ergonomic now. And I can see the entire iMac screen when the Cintiq is slanted down for drawing. 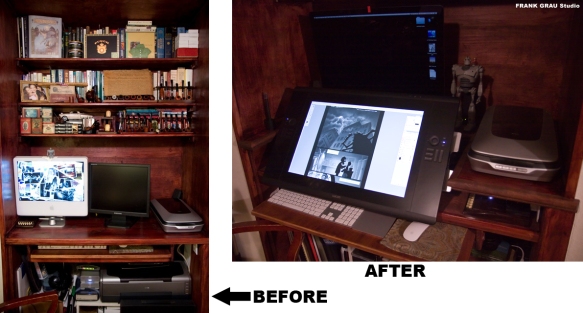 As you can see, I have the required Iron Giant mascot required at every artist’s studio. The image on the Cintiq is a personal comic project on which I’m currently working in my nearly non-existent free time.

11 thoughts on “My Art Studio”